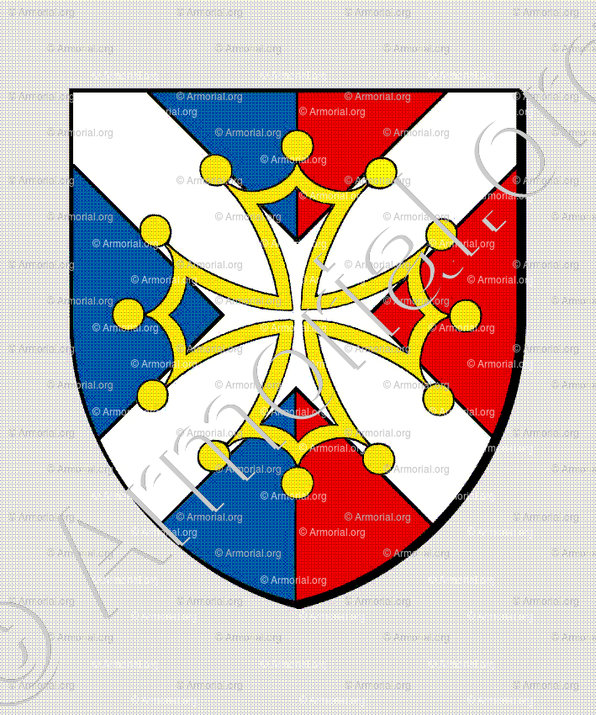 Any unauthorized use of images (unless proof of purchase) is prohibited.

Blason Rémi Andrieux
"Party 1: Azure; 2 ° reds; a cross necklace in silver on the whole with a cross of Toulouse gold heart.

ANDRIEUX! What to say about ANDRIEUX?
"At the time that destroys everything, man responds image"

ANDRIEUX is a name that is associated with a shield.

Are they all descendants of a common ancestor named ANDRIEUX.
The origin of the name ANDRIEUX is not a personification of chance.
In truth, the ANDRIEUX have also written the story, in the shadow of great men.
And the ANDRIEUX arms are not enough to explain the reasons for your interest.
All pictures "ANDRIEUX" in the flow of time, symbolize the permanence of ANDRIEUX in history.
The seal of ANDRIEUX thus seals, the "immortal mortal" charter of the position of this family?

A disastrous prejudice inherited from the Revolution, left thinking that the arms were the preserve of the nobility.
The nobles were not the only ones with their coats of arms.
States, cities, provinces, corporations, church, secular, commoners, etc. had their arms.
Nowadays, anyone who wants it, can carry and wear a shield.
Too often, heraldry is considered a discipline dominated aristocratic pretensions.
In fact, the emblem identifies a family, a person.
Give a "civil status" in many objects: artwork, antiques, dishes, books, etc., while dating them.

Everyone can find his name has left a "right image" comes to us from antiquity.
Was so called, in Roman law, the privilege by the patricians alone expose,
in the atrium of their home, their own image and that of their ancestors.

In some cases, breaking the images of his ancestors and were thrown ashore to trample them underfoot.
This is what later was made with all the faces and arms of France during the Revolution of 1789.


There are no notes at this time. Be the first to rate!

PRODUCT ADDED TO CART WITH SUCCESS

By continuing to browse this site, you agree to the use of cookies or similar technologies to provide services or offers tailored to your areas of interest as well as to secure transactions on our site.
GÉRER MES PARAMÈTRES